Megeve is famous for its luxury hotels, chic boutiques, friendly bars and fine dining restaurants and in the 1950’s used to attract a host of famous faces including Rita Hayworth, Sasha Distell and Brigitte Bardot and still, continues to attract an International clientele. Megeve remains one of the most charming and traditional ski resorts in the French Alps.

Megeve’s location, just an hour from Geneva, is a Mecca for skiers looking for a short ski break or a Ski Weekend and with 445km of freshly groomed piste, Megeve offers wonderful and challenging skiing and snowboarding for all levels and is ideal for groups of mixed skiing abilities. There really is something for everyone from, from long cruisy greens to exciting off piste challenging blacks. The quality and choice of Mountain Restaurants is impressive and regarded as ‘the Best in the Alps’ by Condenast Magazine. Megeve has 3 Michelin star restaurants which include Emmanuel Renault’s 3 star restaurant ‘le flocons de sel’, 2 star restaurant ‘1920’ and the 1 star Michelin restaurant ‘La Table de l’Alpaga’.

Not Skiing? There’s plenty to do

Megeve is a Winter sports resort with atmosphere and ambience, an excellent choice for the non skier. For those that want to be pampered you can book a massage or beauty treatment in one of the many 4 or 5 star hotels in Megeve. The local sports centre which is just a few minutes walk from Les Cimes has a spa, swimming pool, sauna and steam rooms, ice skating, curling plus a fully equipped gym.

There are also plenty of scenic walking trails. A walkers pass will enable you to use the cable cars where you can meet skiing friends for lunch and take in the fabulous views of the Mont Blanc mountain range. The ski buses in Megeve are free allowing you to jump on and off wherever you please. There is a local market every Friday and lots of designer shops!

Megeve developed as a ski resort in the 1910’s when the Rothschild family started to spend their winter vacations there after becoming disenchanted with the Swiss resort of St. Moritz. In 1921, Baroness Noémie de Rothschild opened an important hotel which boosted the resort’s development. By the 1950s Megève was one of the most popular ski resorts in Europe which attracted many wealthy individuals and celebrities. Nowadays it is still visited largely by affluent people as is made obvious by the prices of apartments and chalets in resort. Megeve still remains one of the most famous and fanciest ski resorts in the world.

Megève is the ski resort in the beginning of the 1963 film Charade, where Audrey Hepburn’s Regina Lampert meets Cary Grant’s character. It is also the title of one of the tracks by composer Henry Mancini on the film’s soundtrack.

Megève was one of four World Cup venues in the Alps featured in the 1969 film Downhill Racer, starring Robert Redford and Gene Hackman.

Since 1970, Obersdorf in Germany is the twin town of Megève. The German resort is also located in the mountains and famous for both summer and winter holidays. 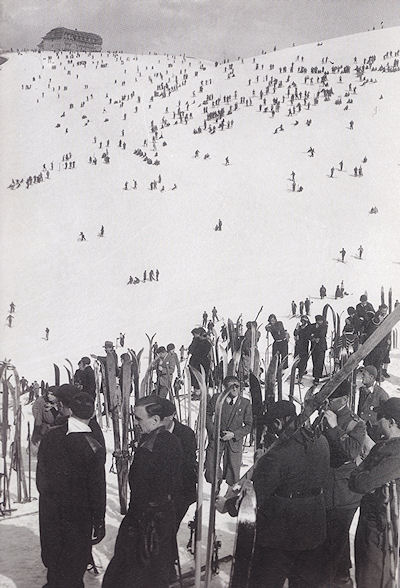